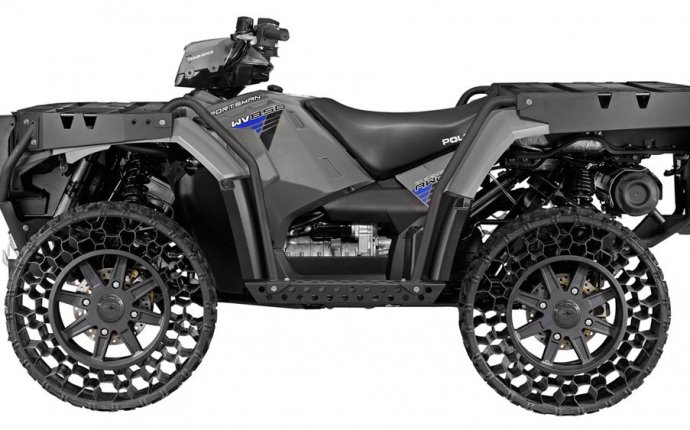 Most Foolish readers have, no doubt, experienced a flat tire. They can be major inconveniences, but aren't usually cases of life or death. Not so in the military, where a flat tire can make those on board a vehicle sitting ducks for the enemy. So, Polaris' new airless tires – or "non-pneumatic" tires – meet a major need, and should rev up its solidly growing sales.

First, a look at Polaris before we look at its new tire.

Polaris and its defense division
Polaris primarily manufactures powersport vehicles. However, it also sells off-road vehicles for utilitarian purposes. Customers include the U.S. government and military, other countries' militaries, and commercial entities. Polaris' goals include growing its non-consumer business.

Its defense division sold its first vehicle in 2007, and now generates about $50 million in annual sales, or about 1.6% of the company's 2012 revenue of $3.2 billion. Polaris believes this could be a $200 million business.

Polaris expects defense revenue to be up for the full year 2013, primarily due to an upturn in defense spending. Additionally, in September, the company announced that it was awarded a contract to customize its MV850 ATV for the German Army. The contract size wasn't disclosed, but this is a coup because it's Polaris' first contract with the German military. Polaris has sold vehicles to Canada's, Norway's, Israel's, and Singapore's militaries.

Special ops getting special tires
Polaris has begun deliveries of its MV850 ATVs equipped with "TerrainArmor" tires to the U.S. Special Operations Forces.

The tire was developed by Resilient Technologies, which Polaris acquired in 2012. The polymer honeycomb provides support for the tires, though it's flexible enough to compress and decompress as it rolls over objects or rough terrain. The tread is composed of rubber and does need to be replaced.

The testing procedures bring to mind Timex' classic ads, in which the watches refuse to die. According to Polaris, the tires didn't fail after being shot by a .50 caliber round, and vehicles equipped with the tires were able to drive for more than 1, 000 miles after being punctured by a railroad spike.

We've only just begun...
Polaris' defense business accounts for about 1.6% (and growing) of its revenue, so this is a small market for now. However, Polaris plans to offer these tires on its off-road vehicles used for commercial and sporting purposes in 2014.

Richard Haddad, GM of Polaris' defense division, believes 60% of non-defense customers may eventually opt for these tires, according to the Star Tribune. As it reported, "If true, it could mean tens of millions of dollars in new revenue and a seat at the industry table with Michelin , BMW and others working to develop indestructible tires." Pricing reportedly hasn't been determined, but Polaris officials were quoted as saying prices could exceed $500 each, which would be a 30-50% premium over traditional offerings. So, it seems likely the profit margin for these tires will be higher than Polaris' overall profit margin, which is a solid 9.9%. That would result in the contribution to net income being greater than the contribution to revenue. Polaris' off-road vehicle buyers have an average income of $120, 000, so affordability shouldn't be an issue for many.

Industry status of airless tires
While airless tires aren't new, their availability to the mass market would be new. Several companies, such as Michelin and Bridgestone , have developed non-pneumatic tires. Michelin developed the "Tweel" in 2005 and Bridgestone the "Tyre" in 2011. And The Goodyear Tire & Rubber Company produced a tire along a similar line – a self-inflatable tire – which was one of Time Magazine's "Best Inventions of 2012." These airless tires haven't been offered for sale to the mass market (the Tweel is available for certain vehicles, such as skid steer loaders) because the tire companies have run into issues concerning loud noise and durability. So, Resilient – a small start-up when Polaris acquired it – and Polaris, which had no previous experience in this field, have been able to do what big companies long focused on airless tires have failed to do for so long. That's impressive, to say the least.

In addition to technical issues, another factor at play is the fact that airless tires would cannibalize these companies' traditional tire sales. So, a lack of genuine commitment could be a factor. Some have been touting tire company stocks, as they've done very well over the last year thanks to strong auto sales. However, the picture changes over the longer-term. Select tire - and other highly cyclical - stocks might be a good fit for shorter-term investors and/or those who frequently monitor their holdings. However, there are better options for most investors who subscribe to the long-term buy-and-hold philosophy.

Here's how Polaris, Ford Motor, and the tire companies mentioned have performed over the 5-year period:

Foolish takeaway
I've recently highlighted Polaris as among top-performers that look attractive going forward. In addition to continuing to innovate and diversify, it also sports great metrics, especially its 49% return-on-equity, indicating it's extremely efficient at generating profit from shareholders' investments. Its TerrainArmor non-pneumatic tire is a great example of Polaris' acquisitive prowess and innovative streak, and provides another reason for Foolish investors to look into this stock.