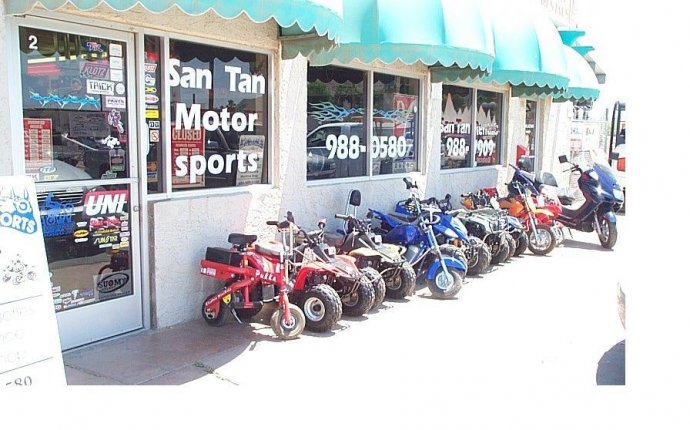 We had a unique opportunity to test the DWT Moapa Bias ply tire and the Maxxis Bighorn Radial ply tire in the smoldering heat of the Arizona desert. Here’s how it went.

The information gathered from this test is from one day of riding. These results could change if tested over a longer period of time. Your results may vary depending on your vehicle, riding style and terrain. For more information about the differences between Bias and Radial Tires please read our What’s what?: Bias Ply and Radial Tire article.

My good friend Johnny and I met Haim Yanai, the US Director for TomCar, out in the Arizona desert north of Phoenix. Haim had two TM5 Tomcars waiting for us. One was fitted with the DWT Moapa (Bias) and the other with the Maxxis Bighorn (Radial).

Here are the sizes along with the specs for each tire model. The Brown car is equipped with DWT Moapa Bias ply tires and the Green car with the Maxxis Bighorn Radial ply tires.

We picked a harsh desert area north of Phoenix AZ which is favored for testing because of the vast area of terrain. This area is also known for chewing up tires with sharp loose rocks.

Our first stop was along a trail where there were several steep descents and inclines. We went up from the bottom of the hill in both vehicles, once in low and once with the rear diff locked, to try to feel the difference. I thought this would be a good place for a warm up as I had much bigger obstacles in mind but I needed to make sure the 2 wheel drive TomCars would be able to handle the really tough stuff.

Both cars went up the hill and climbed equally well.

From here we went to a spot with a very steep hill climb that had some horrible ruts and loose rock. This obstacle would surely test the tires to their max. A couple of years ago I took some buddies down this same hill on quads. It’s so steep that one of them rode with his feet on the front fenders (trying not to go over the handlebars!) while complaining about how steep and loose it was! Plus you have to make a few turns in the middle of the hill.

Here’s the sign you see as you get to the fun part of the hill climb.

We decided that Haim and I would take 4 runs up the hill switching each time to see if we could tell the difference in the hookup/performance of each tire model.

I let Haim go first as they are his cars. I watched in amazement as I could see one of his front tires in the air as he hit a deep rut on one of the steepest part of the hill. From behind it looked unsettling but from inside the car, as I would soon find out, it was quite smooth.

Now it was my turn to run before we discussed our thoughts as to which tire did better.

My first run I had Johnny ride shotgun.

Wow, what a fun time running up and down this nasty hill. When we pulled up there were a couple of rock crawling buggies looking at us with a look like “you guys can’t make that hill with those 2 wheel drive Tomcars”. We sailed up the hills with no problem.

As we took a break to discuss how the tires did it was amazing how close our thoughts were. After our first run up the hill in different vehicles we each thought “wow, this tire was great”. Then after testing the other tire up the same hill our reaction was, again, “wow THIS tire is ALSO great”. It was impossible to tell any difference in traction from one tire to the next. That is not a bad thing, but I did not expect them to be this close.

Now off to my favorite part, a short rock crawl. I picked a spot again that I have done on 4×4 quads before. It not only has ledges, but has loose shale type rock that is hard to get traction on.

Once again we talked after we both had our turns in each vehicle. My first thought as I watched Haim having some problems with the Bighorns Radials was that the Moapa’s Bias ply did better since I breezed through the rocks. Then I switched to the Bighorn Radial and made it look equally as easy. I believe I just happen to take a better line. Both tires grip the rocks extremely well. I would have no problem running either tire on my vehicle. I navigated the 2 wheel drive machine up a couple of ledges that I didn’t think was possible in 2 wheel drive but both tires flexed on the jagged rocks and gave me all the grip I needed.

As we were heading back towards our staging area I stopped where the road makes a 90 degree turn. The road at this spot was fairly smooth with a loose granite surface. I asked Haim if he would take each TomCar and see if he could get them to slide. He made three passes with each tire and for the first time said he could feel a difference. He said the Moapa Bias ply tires did not slide and wanted to track around the corner.

The Bighorn Radial on the other hand could be pitched sideways and slid around the corner.

The difference does not make one better than the other, just different. There are situations where you may want the tire to either stick or slide depending on what you are looking to do.

For our last test of the day we headed over to some small sand hills. We tried them again back to back with the same results. We were able to go about the same distance with each tire before digging into the soft sand. On one run in low with the Bighorn Radial, I went until I was digging in and engaged the diff-lock lever then floored it. We started moving but were soon buried to the frame.

It was fun though, throwing a huge roost of sand. Oh well, Haim was there to pull me out. We did one last run with each machine in low and with the diff-loc engaged. Both machines made it with ease.

When we arrived back at the trucks we inspected the tires for any damage. The only thing we found was that the Maxxis Bighorn radials showed some signs of wear/chunking on the tread blocks. I say this was probably due to a few instances during our rock crawl test. The rocks in that section of the test were very jagged and sharp. The DWT Moapa bias tires showed no signs of wear from this ride.

Both tires performed remarkably well for the extreme conditions we put them through. Our original thoughts were that we would see some very stark differences between the Bias ply and Radial ply tires but for our test we found very little difference. We even remarked if we were blind folded when we got in the vehicle and never look at the tires we would not be able to tell which tires we were riding on.

If we look at the prices there is a pretty good difference between these two models (Moapa being less expensive). Given the very similar performance characteristics we experienced here the Moapa may be a better buy if you are on a budget.